I love technology, the expediency of a hundred and forty characters in a billion blogs• and high-def glossy images that flicker and tumble by, special effects and how there’s an app for everything.  I also love old school, you know mahogany libraries and leather reading chairs, wood pencils with real 2B lead and effective erasers, black and white photography and museums.

No, I’m not bi-polar, I love stories and a good story is both visual and contextual, some people are ambi-absorbent, (I just made that up) but it’s true that some absorb stories equally with their eyes, and their ears (or brains if you’re reading) and let’s face it, some storytellers are ambi-oratorical (oratorical is real I added the ambi) meaning they tell their story with words that are visceral and with visual props – be they hand gestures, powerpoint presentations or a good old internet meme.

I write today rocking on the edge of my squeaky chair, thrilled about the transmedia precipice we storytellers stand on.  With an illustrated novel due back from my editor/agent this week (208 illustrations and some 40,000 words), how thrilled was I to read this article from THE MILLIONS yesterday, about the resurgence of illustrated novels (not graphic novels – though I love those too) novels that are considered literary, you know for grown ups.  Last week I read a story about how the next big wave in online search will be image-based (no words). Just as the worlds of publishing and film are merging to one industry.  So should the worlds of those who write their content.

It got me to thinking how beneficial it would be to those storytellers who aren’t ambi-anything – to sit down and practice at a storyboard.  Particularly if you are a screenwriter that uses Blake Snyder’s scene board it should be an easy step to take.  One of the most common notes I give on scripts centers around how to make the action blocks more effective.  Either in making them active (duh), writing them in the order they should unfold before the viewer, or only including things that can actually be filmed.  The nice thing, if you approach it this way, you also hone your pitch. 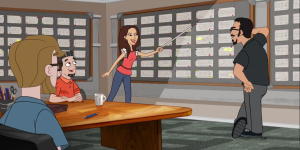 Also, if this is a note you are getting or if you just feel your writing is not coming across as the way you envision it in your mind, sketching it out can solidify what you are trying to communicate.  Oft times, when your story gets the ‘it’s just not for me’ note it’s because the reader isn’t reading what you are envisioning – and you are so close to the story in your mind, you cannot fathom how no one else gets it.

So if you’re having a challenging time conveying in words what your mind’s eye sees – or even what some refer to as writer’s block – try getting that image down in a sketch then describe that sketch.

Before you click me off thinking ‘I can’t draw a straight line’, let me tell you it doesn’t matter.  (and if you insist, I’ll tell you ‘there’s an app for that’, true story).

A quick search online will reveal scads of apps, and how to’s of storyboarding. I’ve included some below.

It doesn’t matter if you draw stick figures or hairballs, or get an app – once you visually convey what you want to describe it will be so much easier for you to describe it in words and who knows, if you become good at it, you may get the directing bug or at the very least be able to cut together a promo piece.

Last year Pixar story artist Emma Coats was all over the web with her 22 story basics from Pixar – yesterday I saw Pixar used in an example of how to sell in a business completely devoid of any entertainment value.  Pixar’s stories go back and forth between script and storyboards over and over until they are just right (this takes years).

I know you still can’t draw a straight line.  So do me a favor.  Pick a video online – pause it – do a screen grab – print it – and trace over the outlines (not the details).  You don’t have tracing paper? Get a bleepin’ sharpie or your kid’s crayon and trace directly on the page you printed or hold it up to a window and you have a light box. Voila.

And if you feel more comfortable with the tracing approach the internet provides endless opportunity for you to search for the image in your scene, you don’t have to buy stock photos, you’re just tracing them for an exercise. 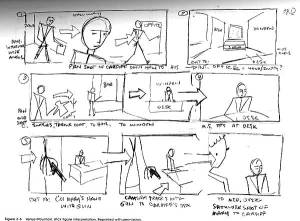 What was, “he walks by, worried about what to do” Becomes, “He slumps toward the office, searches for an escape…”  BIG CAVEAT: Do not include the camera direction you see in this or other storyboard examples. This is just an exercise to get down what you imagine the scene to look like in your head, so you can then describe the scene (not the camera angles) in words.

READ MORE ON EMMA’S NOTES OF DRAWING FROM FILM

And while we’re on the subject of board vs. bored; no matter what you write please oh please make sure you are not using words that sound the same as the word you really mean to use.  I’m talking, council vs. counsel, bellow vs. below (although these two don’t even sound the same), shutter vs. shudder – the list can go on forever and most writers are conscious of the oft preached your vs. you’re and their vs. they’re.  Though some programs such as Word will even catch this mistake – spell check won’t.  Please be diligent about this – I kid you not a fairly decent script just left my desk with all of the above mistakes, which knocked it down a few pegs in my opinion – the one I am paid to give. :o)

Words (and imagery) are your tools to create make sure they are in good shape and learn how to use them properly.