How does technology influence your stories?

Filmmakers have been adapting to shifts, well since Georges Méliès started flirting with the medium as so imagined in THE INVENTION OF HUGO CABRET. 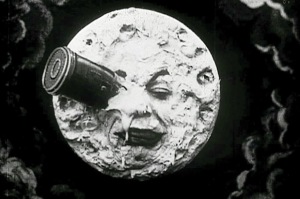 A recent article in the Wall Street Journal takes a surface glance of films and technology – focusing mostly on how today’s directors incorporate text messaging into modern tales.

In its research of how this was handled in the past it gives some examples such as first brick size telephones and the emergence of computers as mainstay in character’s lives. Given its focus on text messaging, I was surprised it misses one clear example and IMO the best on-screen treatment of technology to date in 1998’s YOU’VE GOT MAIL.

When Amazon Studios chose their first development film, I THINK MY FACEBOOK FRIEND IS DEAD, I gave an earnest stab at the treatment, citing YOU’VE GO MAIL as the level they should strive toward for incorporating the technology into the film.  (Ultimately I didn’t believe in the story so I bailed).  Which brings me to the point of why the Ephron directed film was so successful.  The story.

In this excerpt from the article it’s clear how relying on technology can hamper your story.

“…Now technology is moving so fast that filmmakers struggle to predict how people will be communicating by the time their film comes out. The recent romantic comedy “He’s Just Not That Into You” had a character, Mary (Drew Barrymore), who boasts to a trio of colleagues that a potential paramour “Myspaced me,” meaning that he contacted her via the social network Myspace. The problem was, by 2009, when “He’s Just Not That Into You” was released, people just weren’t that into Myspace, which had steadily declined in popularity…”

Technology will forever be changing – it’s supposed to.  Now, as the WSJ article indicates, directors are using text on-screen to avoid showing 2 hours of cellphone screens to indicate a conversation.  Can you say, silent film?  Let’s take a surface overview like the WSJ article:

Then came talkies, filmmakers knew a person with a phone to their head was not very interesting so we got split screens and business scenes where Michael Douglas could walk on the beach with a massive block to his ear – one that looked like a walkie talkie.

Then came computers, smartphones and text messaging.  Seriously… when was the last time something was funny enough to make you LOL much less ROFLMAO?  If I ever use one of these you know it was side-splitting, I don’t bend to trends even it they are only 3 characters long.  Anyway the point is, for any technique to work it cannot be so pervasive that it impedes the plot (which is why the BBC’s Sherlock works almost as well as YOU’VE GOT MAIL) even if the technology is part of the plot.

Ultimately this mistake is what turned me off of I THINK MY FACEBOOK FRIEND IS DEAD.

Something as simple as a keyboard tapping sound effect tells us Meg or Tom are using the technology as they go about their business.  In fact the title sequence is the most we see the technology in one stretch.  As a result, the story is nearly timeless and that is what you should strive for.

In all things cyclical, I say dust off those period dramas… mark my words.