The first in a series of what is going on in the marketplace that probably has more to do with why your story isn’t selling than any consultant will ever tell you.

I used to do a notes from the net mashup of things that have been floating across the cyberlines that may be of interest to writers of stories for any outlet.  Lately, there have been many ‘consultant/guru’ writing sites that have been doing the same, plus I’m sure most of my readers already are in tune with a lot of the circles, so I think for now that segment is retired – However, there is still a vast world out there of seemingly unrelated aspects of how people consume their diversions – namely the stories we write.

Which brings me to this: 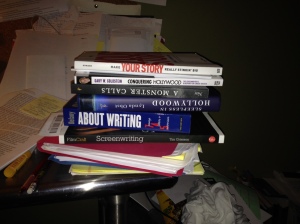 A pile of books that came in while I was buried deep in scripts for two simultaneous screenplay competitions over the last FIVE months.

One was a gift, one I actually ordered for my own reading pleasure, and the rest were marketing copies

FYI – if you ever find yourself wanting to send me some reading material, please email me first, at the very least so I can thank you or follow up but also it may save some confusion as to what I am actually willing to read.  Last year someone sent me a subscription to Cigar Aficionado, a beautiful pub no doubt but really off target for me – I have no idea who it came from and can only speculate that it is because I was writing about Cubans at the time.  I gave up reading magazines about 10 years ago, waste of time and money.  More recently I stopped watching TV at least in the prime-time sense.  Because I have no time and frankly even if I did have the TV running, I’d be reading or writing while it was on. I’m a streaming / Netflix / Amazon binger.

Now, to bring it back around; During the months that the books were piling up, I was asked to read a mountain of spec pilots for television shows because the competition was inundated and needed for me to focus on those instead of features.

I agreed but only if they were specs not based on existing shows.  Wow, what an incredible batch of pilots.  Once I did get to my features stack, I found myself disappointed after all of the fantastic worlds established for the pilots.  The only gripe (and most common note) I had on most of the pilots was the format length was all over the place.  So if you are jumping to the small screen please do your homework.

Why are so many talented writers running to television?  I don’t think it’s a love for their characters or the aching desire to be a show runner.  Rather, these savvy writers are going where the type of stories they write have a chance of getting made.  INSERT DRUMROLL

Because political, comedy, period, drama, romance and the basic stuff of life is next to impossible for the feature studios to justify – and here’s where one of the books comes in…

If you are a writer or creator of stories that you hope to make you the next Stephen King, Tom Clancy (R.I.P) or even Candice Bushnell – you have to read the chapter entitled SCENE 3 of Lynda Obst’s SLEEPLESS IN HOLLYWOOD.

Hell even if you are just a movie fan sick of sequels and having to strap on headgear to chomp on your $10 popcorn, you need to read this chapter.

To generalize: American movie studios are being run by China.

You’ll have to read it to get the full apocalyptic gist – but if you are at all wondering why you can’t sell your script you owe it to yourself and your family to read it and find out why. Hint — it is show business not show hobby.

International sales has long been an escalating factor in what studios greenlight or even back for distribution, but the numbers Obst outlines are a staggering wake up call to the industry at large.  Fact is, if you love a good romantic comedy or political drama – the stuff of classic Hollywood – put yourself in Charlie Brown’s shoes on stage in A Charlie Brown Christmas, hear his friends telling him the holiday is all run by an Eastern syndicate?

That is the gist of our story world.  China wants to own Hollywood and Hollywood thinks they are negotiating wisely so they can get their product on China’s shelves but in reality it boils down to a quick buck.

To summarize, films coming into China have to be 3D and they have to pass the China censor test but even more importantly, they have to be stories the International community wants to see and can relate to.

Fun fact she presents is that the Oscar winning Slumdog Millionaire had its worst performance in its Native India.

All of the major International markets have their own film businesses – but a Chinese firm now owns AMC, countless VFX houses and every swinging dick over there and here wants to make movies – the irony of course is that a lot of them want the glamour of classic Hollywood – which is going the way of the dinosaurs because of everyone in the aforementioned contest.

And before you say, ‘well thank my keyboard I’m a novelist’, hang on.  Most major publishing houses have either a film division or a first look film deal.

Shwew.  Enough already. What’s a storyteller to do?

If you take it to heart it is and if you’re a screenwriter stop writing scripts that HAVE to be played by white-bred, Miss America oh, wait – Miss America was not a Barbie this year – writers are you really so far behind the times that the Miss America pageant is more socially advanced?  Another thing that Obst points out in this chapter is that AVATAR is to blame (at least for the 3-D aspect of the problem).

As much as I think Avatar was a direct rip-off of Pocahontas but with blue people, at least it made the story universally appealing – while changing the industry landscape forever.

GRAVITY is probably the closest thing to perfect all screenplays and studios could strive for.  (In fact Cameron is thanked in the credits – for his 3D trailblazing).  Here’s why it’s so great:

Universal (easily grasped premise – by anyone in the Universe)

Amazing visuals and use of technology.

George Clooney in 3D.  I love George, one of the smartest men in and out of the business, but that aside George in 3D lets just say this is a marketing coup, no doubt worth the price of admission.  Can you imagine if RDJ kept the role – that may even be worth more but I digress…

Bottom line; if you want to tell smaller, personal stories, make them yourself or go to television (and we’ll get into some of those trends in future posts).  If you want to compete with the likes of Gravity – strive for the fact that its story and production hits on all cylinders.

More importantly, if you want to be a writer understand what is going on.  No amount of guru guidance about structure and beat sheets is going to make your premise fit into today’s landscape unless you do your homework.  Then and only then, will the polishing aspects of story structure, help sell your story.  In other words don’t put the cart before the horse and don’t go in with a hobby mentality if you are serious about breaking in, it is show business not show hobby.

I do hope that Obst’s next book will be GOOD MORNING HOLLYWOOD, but until studios are willing to break away from the teets of Global investors we’re in for a long winters nap.

Now that the picture has been painted, in the coming weeks and months I will bring in the major components that are here to stay for the foreseeable future, and how they fit into the landscape of this business but more importantly how they affect what and how you approach your stories.